My year of falling over 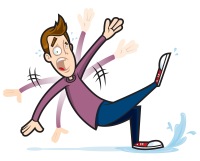 August already. Can 2017 be so far advanced?

The last time I posted here was in early January. “For this relief, much thanks”, you may say, echoing Francisco in Hamlet. That would be an appropriate response, since the last time I wrote on this blog I was suffering from man flu, and Francisco’s next remark in the play is ” ’tis bitter cold, and I am sick at heart.” Shortly afterwards, Horatio enters, the ghost of Hamlet’s father appears, Horatio subsequently tells Hamlet about their chilling (and chilly) experience and the prince gets himself into a terrible tizz about it all. I didn’t get my A pass in Higher English for nothing, you know.

Fortunately the ghost of my man flu has appeared, stalked the frozen castle ramparts and departed. My temperature has dropped. Meanwhile, as in Elsinore, outside temperatures have risen somewhat, though not excessively, this being Deeside and the north-east of Scotland.

Until this year I have been a fortunate stroke survivor – if such a combination of words can ever be acceptable – since very rarely have I fallen over. In hospital, immediately following the stroke, I did so twice: once in a Norwegian hospital and once in a Scottish hospital. For the response in Norway, see page 31 of Man, Dog, Stroke. In Scotland the response of the nursing staff was that my dropping like a stone to the floor of the ward resulted in more paperwork for them and so I must not do it again (I think they were joking). As it was, only my pride was injured as I thrashed about trying to raise myself to a vertical position, much to the amusement of fellow patients. Stressed nurses and bored stroke patients can be a merciless combination.

This year, however, I have fallen several times – twice in February, once in March and once, more seriously, in the middle of June. In March we were returning through the dunes from a walk along the West Sands at St Andrews when I tripped over my feet and fell headlong on to compacted sand and marram grass. On that occasion I was helped to my feet by two passing strangers who, it transpired, lived not far from us in Aberdeenshire. I never got their names. So, if you are one of those strangers and happen to be reading this, you will no doubt remember the idiot with two walking poles, a concerned wife and a miserable-looking but unconcerned whippet fooling about in the dunes at St Andrews last March. I repeat my grateful thanks for your assistance.

A discovery I made post-stroke is that singing strengthens your voice. There is science to prove this apparently and there is at least one choir of stroke survivors that I am aware of. Pre-stroke I was a member of a community choir on Deeside.  Post-stroke I joined the small choir in a local church, and, once I’d mastered the art of one-handed music holding, I enjoyed singing, the social aspect of it and the resultant strengthening of my voice from intermittent squeak, if not to basso profundo, then at least to a reasonably manly sort of bass sound.

So it was with some frustration that, one Sunday morning in June, I tripped over a step in the church and thumped to the stone floor in front of an astonished congregation. At the time I felt little more than embarrassment but as the hours passed I began to realise that there was a major problem with my right shoulder – the one on which much of my mobility depends. Our excellent local hospital eventually x-rayed the shoulder, assured me no bones were cracked or broken and a torn rotator cuff was diagnosed. Believe me, this is not a group of shoulder muscles you want to damage, particularly if you are a left-sided stroke survivor largely dependent on the right side of your body for everyday activities. First there is the excruciating pain; then there is the feeling of clumsiness and stiffness as you try to avoid doing anything at all that involves the right shoulder; and, as so often for stroke survivors, the feeling of weak helplessness.

As I type this, the pain continues, as does my full commitment to the physiotherapy exercises I’ve been given, which I have been assured will eventually fix it. I’m determined to return to what passes for normal, if only to be able to throw balls for our adolescent whippet. At least the pain has subsided to the extent that I am now able to drive short distances again.

Of course, national and world events put all of this personal misery into perspective and if you are immobilised with shoulder pain you have the time to mull over some of them. Over the last few months we have had terror and violence, continuing strife in Syria, Yemen and elsewhere and we’ve had the consequences of that general election. Here in Scotland, that election has at least had the effect of muting the siren calls of the most rabid nationalists. Meanwhile, in July, for those interested in stroke care in Scotland, the Scottish Government published the Scottish Annual Stroke Care Audit.

A smiling physiotherapist treats a smiling stroke patient. In the NHS everyone always smiles.

Once again this document – available on-line only – makes depressing reading. Some modest improvements in acute care are noted, but many health targets are missed and there is only a fluttering attempt to measure the level of good quality long-term rehabilitation for stroke survivors across Scotland – often patchy and frequently non-existent, despite the best efforts of health and social care professionals and charities.

We seem to have reached a point in Scotland where we are able to save lives in hospital only to return stroke patients into the community to a much poorer quality of life than should surely be attainable. Reading the document, you are left with the feeling that the system is under-funded and inadequately staffed. It is.

Stroke patients who leave hospital alive can only obtain decent long-term rehabilitation if they pay for it. One day, our politicians will be brave enough to state this fact in print along with the statistics.

This year the section of the audit report which allows Health Boards to comment on their local situation has been omitted. This is a pity because it was the only part of the document amidst the reams of statistics that allowed the lay reader to understand clearly the pressures under which stroke professionals work. Boards would use the space to comment on such things as inadequate staffing levels, poor training and shortages of specialist accommodation. Cynical old me says this section may have been omitted for political reasons.

But that’s probably the pain in my shoulder talking.

1 Response to My year of falling over